Monica Morrison volunteered for 2 years at the Catholic Teachers’ College in Baucau, Timor-Leste. She returned for her former students’ graduation.

Having not been back to East Timor since leaving at the end of 2010, I wondered how much had changed and whether I would again be confronted by the poverty. Would I be accepted as a visitor this time? Back then I had been working with the staff towards gaining their Masters of Education degrees and now graduation was near and I had decided that I would like to be there to see them receive their awards.

From the moment I left the plane I felt as though I was returning home. Walking across the tarmac, the familiar heat hit me in the face and I saw the wide smile of Anche Cabral (left), one of my former students who now works for Air Timor. This amazing young woman, who represents East Timor in international cycling events, gave me a royal welcome, wrapping me in a warm hug and escorting me through customs and immigration. This visit was going to be wonderful!

My former colleagues, the Loreto sisters, drove me to Baucau. Baucau seemed different somehow and much quieter, perhaps due to the fact that the UN have now moved out. The downpour which met our arrival made everything look rather sad and a landslide had destroyed several of the roadside market stalls.

I was cheered next day by the return of the sun and of the many welcoming smiles of recognition I received and the general feeling of excitement in the air in preparation for the graduation the next day. Mops, brooms and banners were being carried down to the hall, speeches were being practiced and Marie Emmitt and Professor Jude Butcher from Australian Catholic University (ACU) arrived. Invitations for family “festas” were issued including one for me from Assis, and many joyful reunions occurred in the marketplace as former third year students, now all practising teachers, arrived from their villages for their graduation day.

The highlight for me was when my former students received their Masters of Education degrees. I could not stop the tears of pride and joy, and cannot imagine how their own parents felt. I recalled the earlier words to me of Cris, whose own mother died when he was a child: “My mother has come back for my graduation” he said with a hug. What better reward could a volunteer hope to receive than those precious words! I felt proud to represent all the Palms volunteers who have contributed to CTC, acknowledged by the Director Br Fons van Rooij in his welcome speech.

Perhaps more importantly on this occasion, I sat there reflecting that this day was evidence of tangible sustainability. For the first time, the students received their Bachelor of Teaching degrees from the fully accredited Institute itself with only the Masters Degrees for the staff being awarded by ACU. It has taken many years to reach this point—a Teachers’ College fully staffed by trained Timorese, and graduates fully employed in Timorese schools. 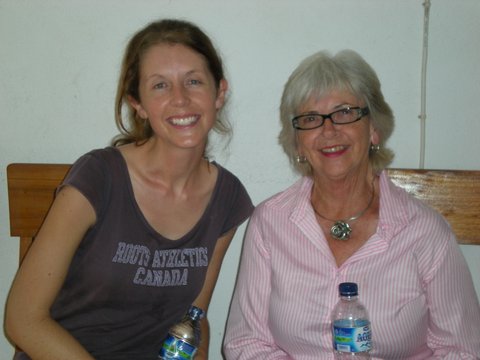 Later, visiting Rebecca (right), a current Palms volunteer in Baucau district, I listened to some of her concerns. I was able to assure her that what she would do over the next two years was very significant indeed. Change can move so slowly when one is in the midst of volunteering. It almost seems imperceptible, but it can and does occur. My graduation visit was important for me not only to join in the celebration with my Timorese friends but to realise that the whole volunteer experience over those two years was all so worthwhile.

Monica will lead Palms Encounter East Timor in September 2013. Contact Palms immediately on [email protected] or (02) 9518 9551 to reserve your space.

Don’t listen to the World Bank. Listen to the people on the ground. They have all the solutions in the world.