When Kathy Brick is not talking about her beloved Collingwood Magpies, she can be quite inspiring. Kathy has volunteered twice with Palms, in Samoa (87-88) and South Africa (93-94), and independently on Bathurst Island.

For the last ten years, Kathy has served as Palms’ State Representative in Melbourne. She has helped organise numerous Information Sessions and Focus Workshops over this time; she has interviewed new applicants, providing useful feedback and guidance to program staff to assist in making placements and providing support; and she has represented Palms at events such as the recent celebrations for Mary Mackillop’s Canonisation. Despite protestations that the details of her volunteer experiences are fading from memory, Kathy is always willing to share her stories and advice with new applicants and people discerning their own mission.

Kathy also organises regular dinners for Palms’ returnees in Melbourne. I’m sure she’d point out that she also enjoys the dinners but certainly all the returnees also appreciate the collegiality of the events and are grateful for Kathy’s efforts. In the last issue, you may have read an excerpt from Kathy’s report from Tanzania. We are incredibly grateful that Kathy was willing to use her own holiday as a Field Visit for Palms. It always helps to get a fresh perspective of various projects, but it also helps Palms avoid the costs of sending a paid staff member.

If the recent federal election taught us anything, it was that there is something known as the North Queensland paradigm. Perhaps this is the reason that, in addition to our Brisbane based state representative, Tony Robertson, we also have Peter and Angela De Haas voluntarily representing Palms in Cairns diocese. Like Kathy, Peter and Angela willingly and generously give their time to conduct interviews.

Anyone who heard Peter speak at the AGM in 2008 will know they have contributed much more. Peter and Angela helped establish Friends and Partners of East Timor (FPET) in Brisbane. FPET’s ongoing friendship with Atabae parish in Timor-Leste has assisted development in Atabae, including through the support of Palms Volunteers in health and community development (Nick and Jane Eager and Margaret and David Hall), but has also greatly enriched the Brisbane parishes of FPET. 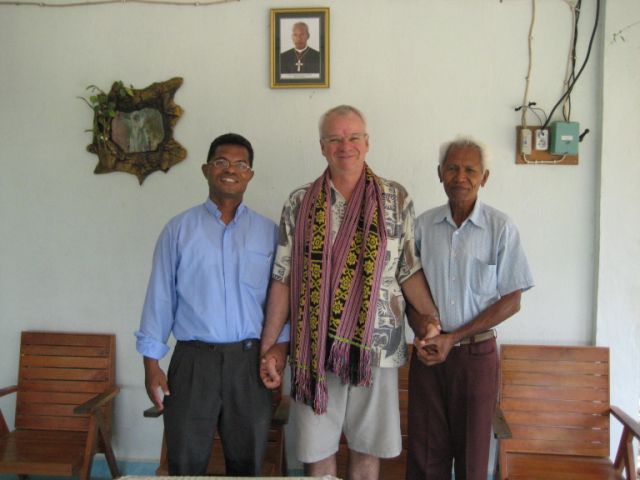 Peter also established Connect East Timor, a village radio project drawing upon his telecommunications experience, which has provided affordable communications in the sub-districts of Atabae, Balibo and Lacluta and in the capital of Dili. Maternal health and emergency health, peace-building and education are among some of the positive results reported at connecteasttimor.com. The project has been endorsed by President Ramos-Horta who envisaged it being extended to all sub-districts of the country.

In 2007, Peter joined with his friends from RMC Duntroon to found the Podmore Foundation. In its short life, Podmore has already supported a number of projects in Timor-Leste, including Palms Volunteers at Ahisaun Foundation (Daniel Gilfillan, Lukas Rajnoch and Kristina Gunawan), development of facilities and programs at Ahisaun and a “reverse immersion” which saw Angelino Benevides spend three months with Palms in Sydney.

While perhaps not as famous as Bob Katter, with all they do for Palms it’s only fair to consider the De Haas family Palms’ “force from the North”.

You cannot shake hands with a clenched fist.