Ellie Virgona, from Moorabbin VIC, is working as a Teacher Trainer for the District of Ermera, Timor-Leste.

It has been only 3 months since I returned to TL wondering where God’s intention would bring me. Always it seems, on some kind of adventure that I’m not sure I’m quite suitably packed for, but nevertheless continue to walk one step at a time, on a path I pray is more straight than spiral.

Every afternoon I walk to the D.A. along the path where the old, the young and the annoying travel. Sometimes children are playing in the forest when they are meant to be collecting wood to bring home to burn for cooking in the kitchen. As a result, it takes them hours to get back home carrying a bundle of firewood on their heads. On one occasion, they thought it’d be a good idea to jump out from behind the trees in the forest and scare the living daylights out of ‘the malae’ (yours truly). I just burst out laughing because it was really cheeky & clearly they are not terrified of me. 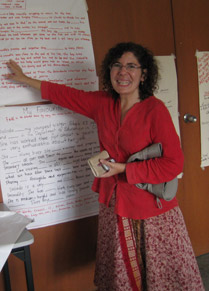 The English classes I teach are going well. So many people want to practise their English skills on me, that my Tetun is still at the level of a 2 year old. So, I too must be patient in acquiring an unfamiliar language.

There are moments here when working here in TL is like trying to work in the harsh sun of the desert heat and you are parched for want of water, looking for shade where there is none, dragging yourself along the hot desert sand. Other times, you feel so good about the progress and development of people, your heart could almost explode with delight.

Over the past few weeks the participants in my class have dropped to almost 1/3 due to their preparation of the local elections in the ‘sukus’ for the ‘xefis’ (kind of local government divisions in the villages of the subdistricts) But here is a disguised blessing that I could’ve easily missed if I misinterpreted the absence. As a result, my small & modest class has shifted from being ‘too-much-of-the-teacher-talking’ to the ‘participants-steering-their-own-learning’. Over the weeks, I don’t think I have ever felt so humbled by the respect I felt they were offering me. I would wager, that in spite of how educated the participants are, few would’ve experienced the type of education that we are used to back home, where we are encouraged to express our opinions and the experiences that have fashioned them. In fact the first lesson, they walked in to the room, sat down without saying a word, and copied everything I wrote on the whiteboard whether they understood it or not, then they left.

Yesterday, was the last day of the course for 2 weeks before we start back again for the next block. They were willing to risk making errors in their speech and offer suggestions to me and make comments about what they’d like to learn in the next block of the English course. Where did that confidence come from? I don’t really know. Will it last? Don’t know the answer to that either. Whatever factors helped flower such a response, the point is, that it happened. On this day, I witnessed some active agency on their part for their own learning. It’s the same buzz you get when you spend months, sometimes years teaching a little kid to learn to read, and finally they put it all together themselves and are actually reading.

Setting an example is not the main means of influencing another; it is the only means.