The first scoping visit I undertook as Executive Director at Palms was to Timor Leste.  Understandably Dili’s accommodation was very scarce in 2000.  Jane Woolford, a former colleague from Caritas Australia was on a longer-term assignment and with her husband Andrew Sexton had secured a small house.

Not only did they turn over the second bedroom to me for a couple of weeks, but they also introduced me to an entire network of people and community based organisations that might be interested in securing the services of a Palms volunteer.  I’m not sure when we had banked this social capital, or what exactly has motivated their ongoing support.  If Andrew is to be believed, it gives him the privilege of contributing to an organisation that takes the necessary risks to make a difference in the world.

Andrew, a part-time school psychologist and part-time at-home dad and carpentry hobbyist waxes lyrical about Palms on nearly every occasion he talks to me.  It’s embarrassing, but you get the feeling he means it so it is also kind of uplifting.  Maybe it’s the supportive psychologist in him, but his help does not stop at supportive praise.

Andrew has been a wonderful on-call volunteer tradesperson at the café.  Everything from replacing tiles and cracked windows, to securing locks, and installing our beautiful footpath tables was done within a week of my call.  The workmanship, so refined and precise, is always clearly completed by someone who cares and without asking he identifies the little extras, like putting a handle on the back door to make access easier.

With Andy it isn’t just about getting the job done.  Both he and Jane express real interest in our personal welfare and the Palms program and their total concern does more than they know to sustain our motivation. 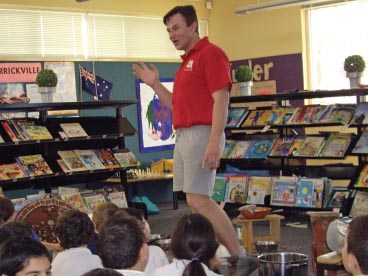 Eddie Leszczynski was among the first applicants for a global mission that I met when starting my first stint at Palms in 1995.  In 1996 he departed for Wewak, Papua New Guinea (PNG) where he met his wife Heriberta (one of the reasons he took until 2003 to return home).  His mission continues now as spouse, father of three and Diocesan Director of Catholic Mission, Parramatta.

Eddie is another who, with a call out of the blue, will come to Palms’ assistance almost immediately.  Eddie drives a utility so it is usually when we have something to move.  Given the number of moves (desks, cabinets, shelving, enormous and awkward artefacts, dishwashers, ovens etc.) in and out of shops, warehouses, auction rooms and offices, up stairs and down stairs, Eddie has been called fairly often in recent years.

The most backbreaking, but also most amusing, move was the huge old safe from the Croydon Park office.  The safe was kept in a small, sunken storeroom in which, if there was more than one person, some very awkward manoeuvres would be necessary.  Unfortunately it took more than one person to lift even a corner of the safe, and the very sturdy trolley took the space of another person, so Eddie edged it to the step at the doorway, before three of us took another 30 minutes to get it up the step and onto the trolley.

Once on the trolley, the safe was wheeled the three metres to just outside the front door where we were confronted by another step, unfortunately steeper than the last and too difficult for the step jumper to negotiate.  No problem, to the side was a grassed area that graduated gently to the level of the footpath.  It appeared very firm before we tried to take that big old safe across it.  Maybe 30 minutes later again we got it out of the bog and prayed as we made a final run at the ramp we had constructed with a couple of short planks into the back of Eddie’s ute.

Getting the safe out at the café was even more difficult and we realised that it was never going to make it up the rickety back steps, so despite the room under the kitchen being unlockable, we slid the safe down the four concrete steps in the knowledge that no thief would ever get it out.

Eddie also does much more for Palms.  He talks to prospective volunteers at focus workshops and orientation courses about his experience in PNG.  He is passionate and committed to giving people the truth, as he knows it, and is not one for glossing over the scary moments he experienced.  He knows we want people to take up their mission in light of all the facts, and despite his vivid and graphic portrayal of some events shaking the faint-hearted, we are all endeared and indebted to this colourful character who so clearly values Palms’ existence.

If you have come to help me, you are wasting your time. But, if you have come because your liberation is bound up with mine, then let us work together.